The German sanitaryware industry in the fight against product piracy 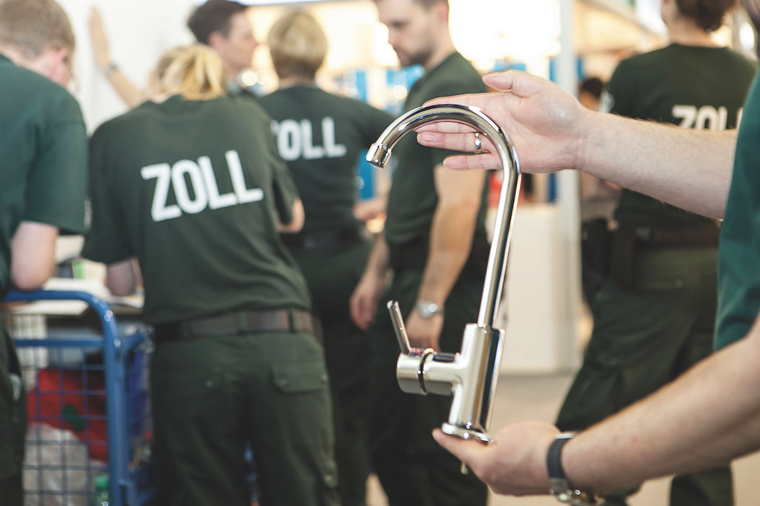 The German economy suffers billions in losses through counterfeit products year after year. But that is not all: Not only does product piracy cost jobs in Germany, it also puts poor quality products on the market which could be harmful to the environment and even to consumer health in the worst case. The members of the Blue Responsibility initiative are therefore actively working for the use of brand products which guarantee high quality standards and are manufactured environmentally friendly and under fair labour conditions.

A perfectly curved bathroom tap, a high quality actuator plate or a comfortable rainshower – the deception is perfect at first glance. Only detailed inspection reveals tiny differences which identify the alleged high quality product as a cheaply made counterfeit. The great danger: Consumers receive a visually nearly identical product, but with an incalculable risk for environment, health and value retention of the building. “The production of counterfeits often uses low grade materials which can even contain substances that are hazardous to health or to the environment,” Veit Szpak from Mepa warns. Christoph Weis, Managing Director at Neoperl emphasises: “Drinking water is the only foodstuff we cannot substitute – products containing non-approved materials are therefore a great risk.” Even if no harmful substances are used, cheaply made copies often wear out faster than the original and have a much poorer environmental balance. “That is not sustainable, neither from an ecological nor from an economic point of view,” adds Wolfgang Burchard, spokesman for Blue Responsibility. The German sanitaryware industry therefore actively works to fight product piracy, for example with customs rounds at the ISH.

Counterfeits – a problem for the overall economy
The damage to the national economy in Germany through counterfeit products is estimated at 30 billion Euro. This results in the loss of around 70,000 qualified jobs per year. The German sanitaryware industry is particularly affected by product piracy because the quality seal “Made in Germany” stands for excellent product quality worldwide and is copied by many. “Many Dornbracht products have been copied countless times all over the world. We estimate that we could create around 100 additional jobs at our production facility in Iserlohn if those counterfeits were not on the market,” explains Andreas Dornbracht, Managing Director at Dornbracht. This estimate is confirmed by a current Frontier Economics study: If the number of counterfeit products in the high end sector were to rise by five per cent in Europe, this would cost another 98,000 jobs and would cause losses of 43 billion Euro for the companies affected. As a result, investments in research and development are becoming increasingly less profitable. These, however, are the basis for the German quality leadership. Counterfeits therefore do not only cause damage to the individual manufacturers, but also pose a massive problem for the overall economy. “Our most important task is therefore to stop the sale and manufacturing of counterfeit products to protect consumers and to safeguard jobs,” Andreas Dornbracht continues. Uncompromising prosecution of product piracy is difficult in many countries, though. “Cost structures and unsatisfactory compensation regulations make consistent legal prosecution of copyright infringements difficult even in European countries,” says Christoph Weis.

On the safe side with quality products
In addition to economic or health damage for end consumers, the reputation of the company is also at risk. If any defects occur in connection with counterfeits, consumers often get angry with the installer or the alleged manufacturer of the product. The resulting image loss can have a devastating effect on the success of a business. Preventing counterfeit products is therefore a top priority and it requires a trained eye. The copies often appear perfect at first glance. “A relatively cheap price is always suspicious. Consumers also have to be careful with products which are imported from abroad under a German brand name,” explains Veit Szpak. Missing brand logos, test labels or DVGW approvals can be other clear indicators for counterfeits. Consumers can also be on the safe side by using the proper sales channels. The risk for acquiring counterfeits is relatively low when buying products through a specialist wholesaler for building installation products. It is important that planners, installers and tradesmen provide detailed advice.

Customs rounds at the ISH 2015 – setting a signal against product piracy
As a clear signal against product piracy, the VDMA German Valve Manufacturers Association will be carrying out monitoring rounds together with German customs officers at the ISH this year to look for counterfeit products. About 200 products were seized during each of these rounds in previous years. Activities such as the customs rounds at trade fairs, which have been organised by the VDMA Valve Manufacturers Association together with customs since 2007, are among the most effective and efficient means in the fight against product piracy. But even if checks are effective in the short term: The plagiarism problem remains current for the sanitaryware industry. “The sanitaryware industry as well as end consumers have to be made especially aware of the plagiarism issue because high standards for quality, safety and sustainability can only be implemented with original products,” Wolfgang Burchard summarises.