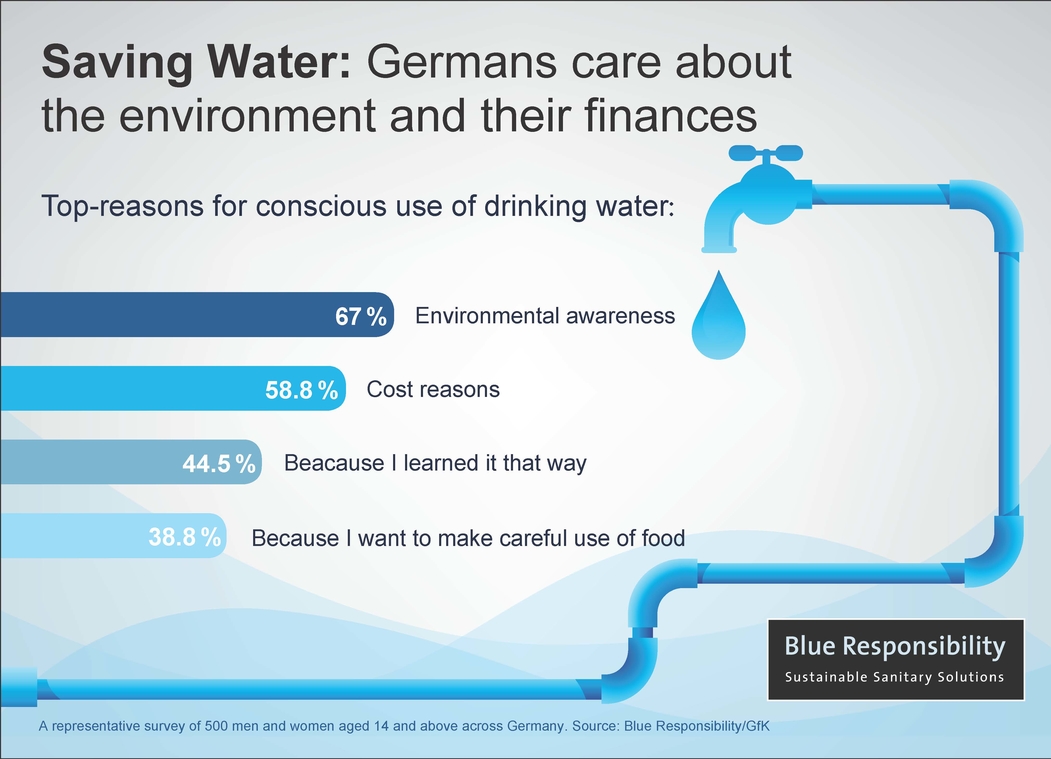 As a life-sustaining resource, water should be used responsibly. This is deeply anchored in the consciousness of Germans. A current GfK survey on behalf of the Blue Responsibility sustainability initiative revealed: more than three quarters of Germans monitor their water consumption. The main reasons for this are a distinct environmental awareness and cost aspects. Almost half of those who save water say that this is how they learned it. Woman are more economical than men. But how practical is it actually to save water?

Germany is a country rich in water resources: it has an annually renewing water volume of 188 billion cubic metres. Only 17 per cent of these available resources are actually used. 83 per cent remain unused. That is not only due to the innovative technologies from the sanitaryware industry and the fact that Germany has plenty of water sources, but also due to the water saving mentality of the German people. By international comparison, Germany ranks among the top water saving nations with 121 litres average consumption per person and day. In a current Blue Responsibility survey, almost three quarters of all participants (72.8 %) said that they actively monitor their water consumption in everyday life. Women are particularly intent on saving water: 29.7 per cent state that they are very mindful about saving water, with only 21.6 per cent of men agreeing. Only a small number of Germans (1.1 %) do not worry about their water consumption at all.

The older generation likes to save
Older German people over the age of 60 are particularly good about turning off their taps: 85.1 per cent consciously avoid using too much water. In the age group from 14 to 19 years, on the other hand, awareness for saving water is much lower (42.4 %) and almost one in ten (9.2 %) even said they do not think about it at all. With regard to geographical distribution, the states Rhineland-Palatinate/Saarland (92.3 %) and Saxony (93.8 %) are the absolute leaders when it comes to saving water – both with about 20 per cent above average. Citizens in the densely populated states North Rhine-Westphalia (64.3 %), Bavaria (63.9 %) and Berlin (63.9 %) are less conscientious about their water consumption.

Environmental awareness as top motivation for saving water
Water as a resource is plentiful in Germany, excessive saving measures are therefore not necessary. Sustainable use is still sensible, though, as saving hot water can also mean saving energy. The Germans agree: Blue Responsibility identified the reasons for saving water – over two thirds (67 %) of water savers cite environmental awareness as their motivation.
This is followed by financial reasons, with 58.8 per cent of participants stating that they monitor their water consumption to spend less money. Workers (71.5 %) are the biggest savers who see the cost aspect as the driving reason for saving water. In Germany, Mecklenburg-Vorpommern is clearly the pioneer for cost reduction: with 33 per cent above average and a great gap to all other federal states, citizens there appear to be particularly cost-conscious (91.8 %).
In addition, the awareness for saving water is firmly anchored in people's minds. Almost half of the participants (44.5 %) stated that this was “how they learned it”. This attitude is particularly prevalent among young adults between the ages of 14 and 19, with 60.1 per cent stating that they save water because that is what they learned to do.
Some of the participants even watch their water consumption because they want to be careful in their use of food (38.5 %). This group is headed up by the self-employed, freelancers and farmers (52.4 %).
Overall, environmental awareness (+8 %) and the financial aspect (+6 %) are more important to women than to men. Overall, women think more about the use of water as a resource because they cite clearly more reasons than male water savers.

Sensible: conscious use of water, but no extreme measures
What many Germans do not know: drinking water, as any other food, has an expiry date. Stagnation in pipes through excessive water saving can lead to deterioration of the drinking water quality. The German water saving mentality therefore has to be considered critically. “Water has to flow,” says Wolfgang Burchard, spokesman for the Blue Responsibility Initiative. Stagnation leads to contamination through germs. Waterworks consequently have to carry out forced flushing to use up the saved water afterwards. “Clean drinking water is an important foodstuff and our most precious resource. On the one hand, we have to prevent the negative impact of unnecessary water saving and ensure drinking water hygiene. On the other hand, we have the obligation to use and handle drinking water responsibly, also taking into account the aspect of energy efficiency, particularly when it comes to hot water.” This means that the conscious use of water is necessary at all times while extreme water saving is not practical.