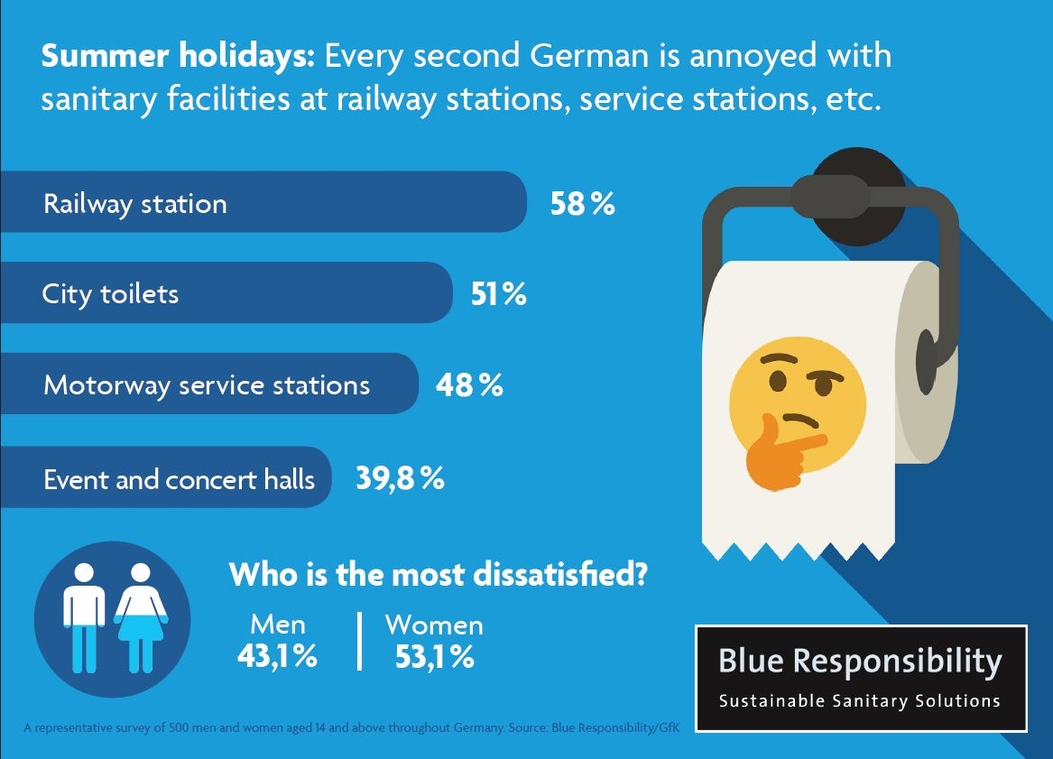 A current GfK survey on behalf of Blue Responsibility shows: users encounter a lack of cleanliness and hygiene in (semi-) public sanitary areas.


During the holiday period in particular, many public bathrooms in Germany cause irritation. According to a current GfK survey, around half of Germans have had bad experiences with dirty and damaged sanitary facilities, particularly in railway stations: About 58 per cent of Germans have been annoyed very often or are always annoyed about the condition of these public sanitary facilities, and furthermore the figure among teenagers (aged 14 to 19 years) is 75.4 per cent. 51 per cent complain about the state of the facilities in city toilets too. This can become a daily irritation for travellers and tourists, particularly now in the holiday period. Also when travelling by car, almost half of Germans (48 per cent) are annoyed by the condition of sanitary facilities at German service stations. It can be particularly unpleasant for parents with children: People with at least one child in the household are irritated quite frequently especially with regard to the conditions they find there (60.1 per cent). Investments in public sanitation facilities could represent a huge improvement in their perception and make journeys pleasanter. High-quality valves, innovative materials and modern WC solutions ensure an optimum standard of hygiene and a pleasant atmosphere - in public wash rooms too.

In this representative GfK survey carried out on behalf of Blue Responsibility, Germans were asked about public sanitary facilities (at railway stations, for example) but also about semi-public wash rooms. This includes sanitary facilities at swimming pools, concert halls, restaurants and hotels. The GfK survey shows that semi-public wash rooms are generally perceived by users to be better than public sanitary facilities: Semi-public bathrooms, for example in restaurants and airports, cause less consternation and are often fitted in a more up-to-date fashion by private owners. Generally, they are also cleaned regularly. Almost a quarter of respondents (24 per cent) are irritated by the sanitary facilities in restaurants This figure is just 16.3 per cent when it comes to airports. Bathrooms in hotels receive the best scores from Germans: only 9.5 per cent of respondents were recently dissatisfied with the condition of hotel WCs.

According to the survey, women are annoyed about the sanitary facilities at some establishments more often than men. This is the case at service stations, for example: 53.1 per cent of women complain about the conditions there, and by contrast this is only 43.1 per cent for men. These are visited more frequently in the holiday period: At least 47 of Germans use their car to travel on holiday (1). According to the GfK survey, 73 of Germans are prepared to pay for clean public facilities at a motorway service station.
When it comes to hygiene in (semi-) public wash rooms, the most sensitive group is teenagers (aged 14 to 19 years): 63.7 are annoyed with city toilets on the scale between often and always. Due to the high standard of hygiene at their own parental home, they presumably think it is unreasonable in terms of hygiene and odour when it comes (semi-) public bathrooms. Comparing the number of respondents, who are irritated particularly frequently by public toilets in cities and municipalities, Bavaria (66.2 per cent), Hesse (64.4 per cent) and Baden-Wuerttemberg (59.9 per cent) take the lead here.

s
The main problems are a lack of cleanliness and hygiene
Germans are particularly dissatisfied with the cleanliness and hygiene of (semi-) public toilets (81.7 per cent). 63.6 per cent of respondents are also disturbed by the odour of (semi-) public sanitary facilities. In third place at 53.8 per cent, according to the current GfK survey, is irritation with the lack of accessories in the bathrooms, such as soap, toilet paper and hand towels / dryer. This was more of an annoyance for women (57.8 per cent) compared to men (49.9 per cent). Users in Berlin in particular are annoyed with this shortcoming: 75.1 per cent of the respondents there gave this as a reason for their irritation. The Blue Responsibility initiative and its members offer customised sanitary solutions for private individuals as well as the (semi-) public sphere. Particularly innovative materials ensure firstly that fewer bacteria and less dirt adheres to the wash basin and valves, and secondly this means they can be cleaned more quickly. Many Blue Responsibility companies also offer rimless WC solutions which considerably increase hygiene. German sanitary manufacturers supply touchless taps and toilet flushes, and these are being used increasingly. At least a quarter (25 per cent) of respondents are annoyed that these are not available in the (semi-) public sector. The shower toilet is being used in Europe with increasing frequency, inspired by Asian sanitary facilities: The hygiene factor in (semi-) public sanitary facilities is increased considerably thanks to a jet of water at body temperature and a rimless WC seat. The shower WC represents an increase in personal hygiene for the user too.

“Modern functional materials and high-quality design also ensure a comfort factor in (semi-) public sanitary facilities. Modern product solutions optimise the hygiene factor in the long-term too and this creates a sustainable solution for (semi-) public wash rooms. This is also pleasing for the end user”, explains Wolfgang Burchard, spokesman for Blue Responsibility.