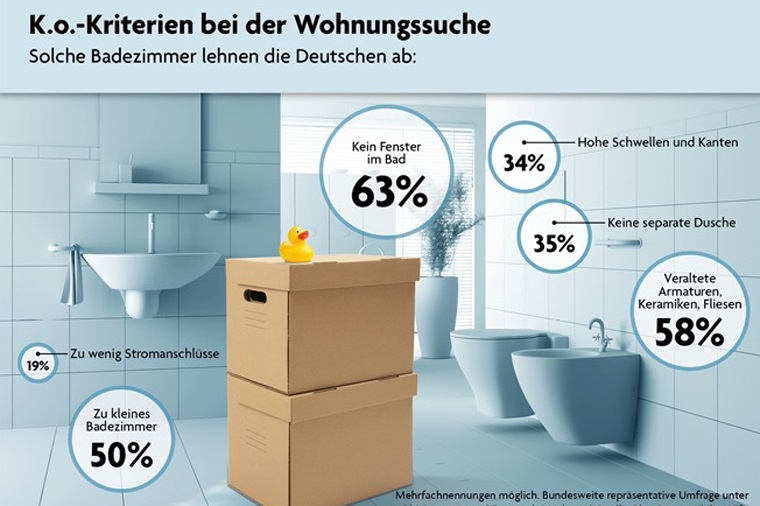 The bathroom is important to nine of out ten Germans. This is particularly apparent in the search for accommodation. Many Germans will cross a property completely off their short list if the bathroom fails to live up to their expectations. For example, 63% of the Germans will not consider a bathroom without window, while for 58% outmoded fittings, ceramics and tiles are a deal breaker. This was shown in a representative GfK study on behalf of the Blue Responsibility sustainability initiative (the study polled 500 men and women aged 14 and over).

Many of those looking for somewhere to live dream of a great bathroom: it should be large, modern and airy, with a bathtub and a separate shower. The reality is often different. An average German bathroom is just 7.8 square metres. A current GfK study commissioned by Blue Responsibility shows that half of the Germans (50.1%) reject a home because the bathroom is too small. Bathroom size is therefore listed in third place of deal breakers. The absence of a window at 62.5% is in first place, followed by outmoded fittings, ceramics and tiles at 58.1%. The absence of a bathtub (31.1%) or a separate shower (34.5%) is a reason for discounting the entire home for around a third of the Germans. Equally, one third of those questioned (33.8%) rejected high steps and edges in the bathroom. Too few power points in the bathroom are such a turn-off for 19.3% of all those surveyed that they would rule out moving there. Just 4.6% of all those surveyed state that they would not rate any criterion in the bathroom as an exclusion criterion.

Having a window is important in the countryside; in the town, it's modern fittings
The more inhabitants a place has the more important it is for the Germans there to have a modern bathroom. In places with fewer than 5000 inhabitants every second inhabitant sees outmoded fittings, tiles and ceramics as deal breakers; in towns with 100,000 inhabitants or more, this figure is as high as 61%. The opposite is true for windows. Whereas 77.5% of people in small towns cannot manage in a bathroom without daylight, this is only a problem for just 55.8% of those living in large cities. Regardless of the size of the town, around every second person surveyed cited too small a bathroom as an exclusion criterion. Even in confined city apartments those surveyed did not want to make any concessions when it came to room size.

Differences also emerged between the various age groups, sexes and income brackets. For example, having a window in the bathroom is most important for 14 to 16 year olds and for all Germans 40 and above. In the age groups 20-29 and 30-39 cite most of those surveyed outmoded fittings, ceramics and tiles as the criterion for exclusion. For people aged 50-59 (42.4%) and those over 60 (59.6%) high steps and edges are an obstacle in the search for a home. A separate shower is also important for men (42.8%), whereas this is important for just one quarter of women. Requirements also rise the higher the income bracket. For example, those surveyed with a household income of 3000 euro have significantly more exclusion criteria than people with a lower income.

Turning the bathroom into a showpiece
The study by Blue Responsibility demonstrates that bathrooms have now become an important living space. They are not simply a place for personal care but also for recuperation. “Baths do not only need to be functional but also need to have long-term appeal, as only this will make a person feel good in their bathroom, and the sanitary ware products can exploit their full life cycle," explains Wolfgang Burchard, spokesperson for the sustainability initiative Blue Responsibility. Architects, specifiers and landlords should place greater im-portance on their bathroom, and take care when selecting sanitary solutions. "High steps and edges can become a real challenge over a lifetime, but also for children. Therefore, bathrooms should be equipped with sufficient room to move, offer solutions level with the floor or elements that are height adjustable. The bathroom therefore meets the needs of its users at every stage of life. Forward-looking planing or modernising the bathroom therefore contributes to maintaining the value of property and to greater sustainability," Burchard sums up.